There's no doubt that you've heard of the George Foreman Grill. After all, this little wonder-machine spawned an entire generation of indoor grills. But if you've never used one, then you're probably looking for a George Foreman grill review that can help you decide if you should buy one.

But wait a moment.

Maybe you should start by asking yourself if you need an indoor grill in the first place. A lot of people don't, but there are a few who would benefit.

For instance, if you live in a state that gets winter, you would probably benefit from a George Foreman grill. Or if you live in an apartment or condo. Or perhaps you really don't like the outdoors.

Likewise, maybe it gets too hot to go outside to barbecue (nothing personal against you, Texas, but that heat is ridiculous). And in that case, an indoor grill is perfect.

That's particularly true if you enjoy steaks, or burgers, or grilled chicken, or fish. Or anything you can put on a grill.

Which is why you need to read a good George Foreman grill review.

By now, you've heard the hype. George Foreman is a brand more closely associated with indoor grills than boxing. Also, since 1994, George Foreman has been the smiling bald-headed face of the indoor grilling, so it's no wonder that everyone associates him with his grills.

But did you know he's not the actual inventor of them? That's right. A guy named Michael Boehm actually created the iconic grill, but nobody took it seriously until George Foreman's wife got involved with it.

And, in a weird, unorthodox marketing ploy, Boehm decided to "knock himself off" and let George Foreman become the face of his invention. Obviously, the strategy worked!

But what if you landed on a George Foreman grill review and don't really know much about them?

So, what is a George Foreman grill?

Simply put, the George Foreman grill is an indoor grill that cooks food without smoke. But there's more. You see, the entire grill is slanted on an angle, so grease drips away from the food.

The end result is food that tastes like it was cooked on a barbecue (complete with grill marks) and is also grease-free. It's much healthier than fried food.

So if you can't grill outdoors on a conventional barbecue, you can use a George Foreman grill.

The great thing about indoor grills is that they're for everybody. For example, just because you're reading a George Foreman grill review doesn't mean that you don't already have a Broil-King XL Regal six-burner gas grill outside your patio door. Perhaps you're not in the mood for a high-production meal.

And that's the wonderful thing about George Foreman grills.

No matter what you're cooking, they make it simple, delicious, and healthy.

Which brings up another key feature of these grills -- they are healthy. You see, if you want to live a healthier lifestyle but have a hard time giving up delicious foods, George Foreman grills are for you.

Thanks to those ceramic grooves and that slanted cooking surface, fats and oils and grease literally melt away. You're left with all the protein and none of the bad stuff.

By now you've read enough of a George Foreman grill review to consider picking one up seriously. That's not a bad idea. Why not take a moment to learn what you're getting into?

The George Foreman GRP1060B four-serving grill is the most common and the most popular. Here's why:

As you can see, this is a compact machine that can cook enough food to feed your family in one go. And because all the fat drips into a tray, the grill is extraordinarily easy to clean.

And if that grill is too small for you, try out one of several different George Foreman grill models.

And if you want a little more from your grill, George Foreman also carries "advanced" panini press/grill combos. The platinum five-serving grill is awesome!

How much it costs

Do you want to know the best feature of this grill? It's this:

In addition, it comes with an amazing three-year warranty. We love warranties because it means the manufacturer stands behind their product. And there aren't many who will stand for three years.

Once you combine the affordable price with that impressive warranty, you've got a great indoor grill.

Here's what customers said about it

Surely there must be something wrong with it. After all, nothing is perfect. But every George Foreman grill review sings the praises of this little counter-top machine.

We love the George Foreman grill. But not only us. You see, plenty of real-life customers do, as well.

Almost every single customer sang its praises. They particularly loved how easy it is to clean. In fact, most people mentioned that in their reviews.

Another thing most customers said was that it cooks evenly. In fact, a few people said it cooks more evenly than their outdoor gas barbecue!

However, a few people complained that their plates didn't heat up or that the heat wasn't even. This sounds more like a technical malfunction. Thankfully, there's that excellent three-year warranty to help them.

How It Compares to Other Indoor Grills 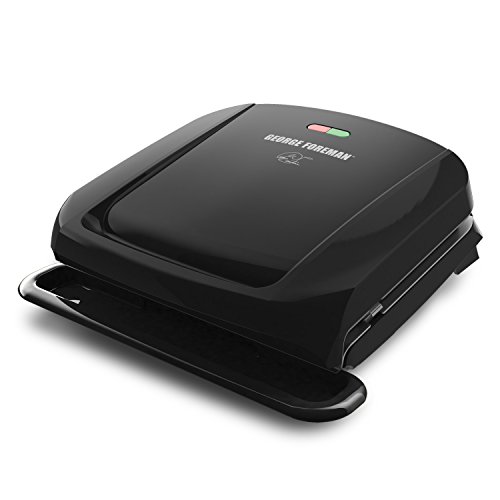 So you want an indoor grill, but no matter how upbeat the George Foreman grill review, you're still hedging your bets. That is, you want to see what the competition looks like.

That's a smart move. After all, our goal here at Super Grilling is to help you make an informed buying decision.

In order to give you all the information you need, we dug around the internet to see what else is out there. We checked out the major brands like Cuisinart and T-fal. And we looked at a few weird-sounding brands, too.

Also, we looked at what they can cook and how healthy the end result is.

Finally, we read through Amazon customer reviews for each grill. Anything that gave us a bad feeling we tossed. After all, if George Foreman can be so smiley, why not the rest of us? 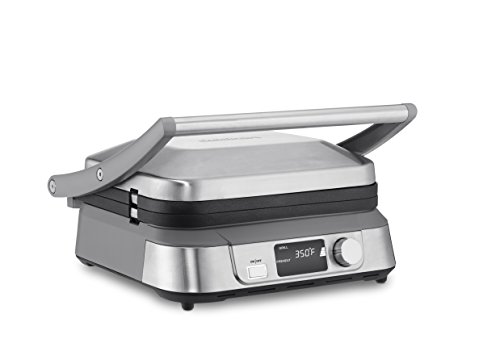 Next is the Cuisinart GR-5B electric Griddler. One thing we can say about this unit is that trying to pronounce its full name is more work than actually using it. Another thing is that it looks super snazzy.

Start with the brushed stainless steel body. Then look at the LCD with that industrial-design temperature knob on the face. Even the placement of a large steel handle at the front looks nice.

Unlike the Hamilton Beach electric grill, the Cuisinart isn't copying anybody.

Also, it's a griddle, a panini press, and a grill. You can cook waffles, paninis, and steaks on this thing. The non-stick cooking plates are removable and dishwasher safe.

Everyone said it's easy to use. Also, customers loved the size, which many said was big enough to cook large steaks or pork chops on.

However, a few people had issues with the build quality. Despite all that stainless steel, the cooking plates are held on by plastic clips, which customers complained broke easily. 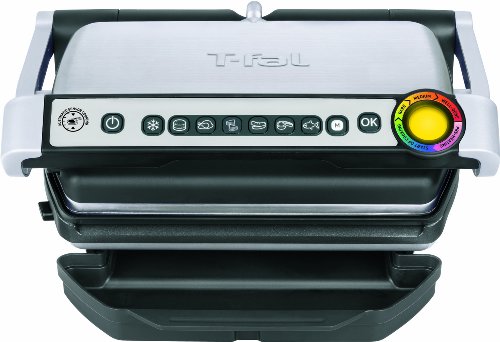 Third in our George Foreman grill review is the T-fal GC70 "OptiGrill." When you look at it, you think that with some wood paneling it would fit in the 1970s perfectly. There is a row of mechanical buttons across the front face, and a big multi-colored indicator sits on the right edge.

But where the T-fal really shines is inside. That's because sensors in the lid determine the thickness of the food, and adjust cooking cycles accordingly.

Also, the cooking plates are non-stick, removable, and dishwasher safe.

This indoor grill comes with a limited lifetime warranty. Wow, another one!

Many customers loved how nicely it cooks meats such as steaks and pork chops. A lot of people also praised it for being easy to clean.

On the flip side, there were quite a few complaints of malfunctions. True to 1970's tech, things tend to go wrong easily with the T-fal's automatic sensor system. 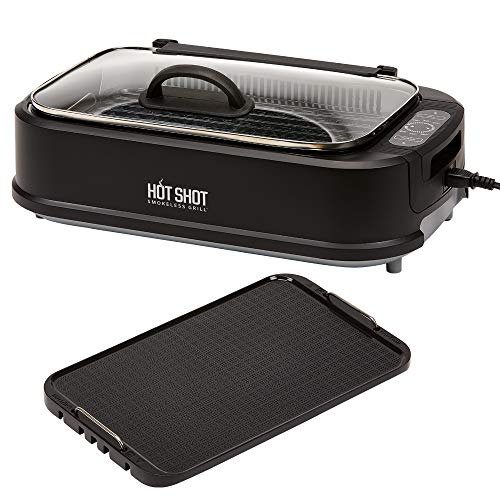 Have you heard of the Hot Shot company? Neither had we until we looked it up. That's when we realized that we had heard of NBA legend Charles Oakley, who founded the Hot Shot Smokeless Grill company.

And the Hot Shot electric grill looks serious. Unlike all the grills thus far in our George Foreman grill review, the Hot Shot isn't a sandwich press. Instead, it's a rectangle with a sunken interior where an actual metal grill sits.

Underneath the grill are heating elements. So you get a replica of a gas barbecue grill. The only difference is that you can put this on your kitchen counter.

In addition to the grill, it comes with a flat griddle plate, so you can cook eggs to go with your steak. Don't forget the A1 sauce.

We couldn't find any warranty information, although they offer a 60-day money-back guarantee.

They said it was easy to clean and cooked amazing food. We're talking hot-off-the-grill meats and vegetables.

The only complaints were that the temperatures were wonky and hard to control. A lot of people had issues with temperatures, either being too high or too low.

Here's What We Think

All in all, we think the George Foreman grill offers the best option for indoor grilling. Not only was it the first indoor grill that drained fat and was easy to clean, but it's also just outright fantastic.

However, if you want something a little snazzier to show off, then the Hot Shot indoor grill is the one we recommend.

That being said, the Cuisinart is a piece of modern art, and that lifetime warranty is nothing to sneeze at.

But we still go with the George Foreman grill. We think it's simply the most versatile indoor grill on the market. And have you seen George Foreman's smile?

What's your favorite indoor grill? Let us know in the comments!

Grub on the Go: The Weber Go-Anywhere Grill Review

Best Grill Cover: The Top 7 Products to Protect Your Grill

Miracle Grill Mat Review: Our Thoughts on This Product